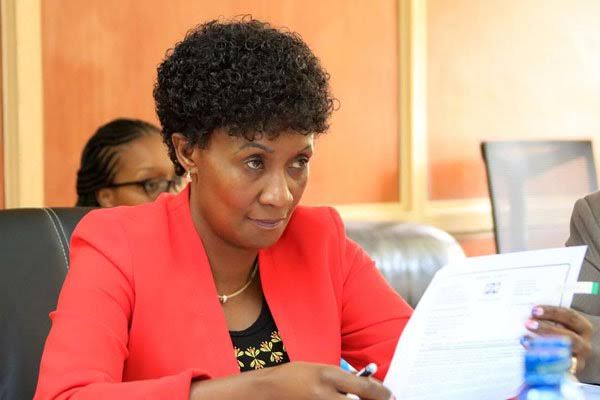 Dr. Nancy Macharia’s tenure as Chief Executive Officer(CEO) of the Teachers Service Commission (TSC) was marred with a lot of complaints from teacher’s unions that accused her of usin’g authoritarianism in her leadership.

In one instance, a teacher called upon her colleagues to rise up against the commissioner who she said in a post ,was running the commission as a personal “kiosk” (small shop).

1.Allowing deduction of teachers’ salary by KEWOTA without consent.
A section of female  teachers  accused Macharia led commission of deducting ksh 200 monthly from their salaries without prior notification.

Any attempt by them to have the deductions stopped proved futile.They woke up and found the Union approved on their payslips without any consultations.

Normally, a teacher is supposed to apply before joining any union but KEWOTA’s case was mysterious.

On the payslips appeared a prompt to Click APPROVE in order to join KEWOTA which many declined but on the pay day to their dismay, it had been approved and a notification sent that ksh 200 was to be deducted.

2.Introduction of Job appraisal policy
If schools were on and you walked to any cyber cafe around you today,chances are very that you would meet a teacher with very bulky documents keying in some information in the computer.

Performance appraisals  and other paper works have been not only cumbersome to teachers but have also diverted teachers attention from learners.

The tutors have been spending hours and money in Cyber cafe’ looking for forms to fill rather than preparing for academic work for the benefit of students.

3.Abolition of school-based learning programmes.
As opposed to when teachers utilised the holidays when their learners were away to further their studies,Teachers service commission CEO claimed that the programmes compromised teaching in public schools.

To date, I still wonder how.

4.“killing” of Kenya National Union Of teachers (KNUT)
One of the biggest TSC objective has been “how to kill KNUT” probably because it has been one of the strongest teachers’ union seen as a threat to the government and employer.

Miss Macharia at some point cut  resources to KNUT with a view to crippling it.

Other Unions have also emerged with any defector from KNUT promised a payrise.

Deregistration of the Union Secretary General Wilson Sossion from the register of teachers at some point was one of the schemes to weaken it.

At the moment ,the once strongest union is left voiceless after the employer lured several teachers to defect to other unions.

5.Mass Interdiction of teachers in CBC rows.
At least 124 teachers were interdicted for skipping training on Competency Based Curriculum,a move that sparked mixed reactions in the country with condemnation from the senators.

Several other teachers were also subjected to Disciplinary actions with many being served by warning letters.
Although the matter was amicably sorted later,it was so dictatorial.

6.Initiation of delocalization process
The process was characterised by massive transfer of teachers away from their homes.

The retrogressive policy led to resignation of many teachers , especially those that were transferred to war-striken areas against their wish.

Several families were disrupted and despite opposition by unions ,the teachers’ employer went ahead to implement it.

In my opinion, it is wise for children to be taught by teachers who understands their culture and language especially now that we have a competence Based Curriculum which takes culture into account.