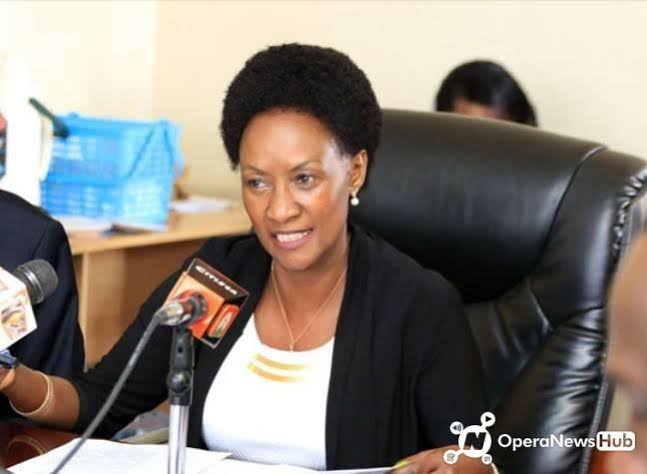 The decision by Teachers Service Commission to extend Nancy Macharia’s tenure has been opposed by an activist group.

Nakuru high Court judge Monica Mbaru has been asked by Midrift Human Rights Network to declare the appointment of Macharia Null and Void.

The group bases on the argument  that the position must be filled through a competitive process.

It says that Teachers Service Commission never filled the position of the secretary competetively.

TSC decided to add miss Macharia 5 more years in office despite the fact that her tenure was to end on Tuesday.

Before then, TSC and Attorney-General Kihara Kariuki, the two respondents are expected to have filled responses.

“The TSC failed and/or refused to open the process of appointment of the Secretary to the Commission to competition in contravention of Article 232(g)(1) of the Constitution and section 16(1) of the TSC Act.”

“Ms Macharia’s reappointment is shrouded in mystery and opaqueness contrary to constitutionally enshrined principles of open and transparent governance in the public service.”

“I verily believe that it is imperative that the filling of the position of secretary be undertaken in accordance with constitutionally enshrined values and principles of the public service especially Article 232(g)(1) of the Constitution,” Midrift secretary-general Joseph Omondi says in court papers.

The lobby group has asked Justice Mbaru to stop the appointment of Macharia until that time when the court case shall be determined.

In a letter addressed to Mr. Kariuki, the law society of Kenya warned of law violations if an appointment is done without a competetive process in accordance with TSC act.

Havin’g been appointed as the secretary in 2015, Macharia’s 5 year term was to end on Tuesday.

The president of Law Society Of Kenya Mr. Nelson Havi said that they were aware that plans were underway to extend Macharia’s tenure by another 5years without subjecting her to a competetive process.

Mrs. Macharia’s term in office has been for a long time castigated by section of teachers due to what they termed dictatorial leadership approach.

Some accused her of Killin’g the Kenya National Union of teachers so that her policies cannot receive any opposition.

She was also accused of very strict policies that teachers consider inconsiderate with some calling for her quick departure from office.

Some of the complaints by teachers included Aon and NHIF deductions,banning of school based programmes and job appraisal policies just to mention a few.

Will she have her second term in office? The truth shall be known after court’s determination.